Necessity is the mother of invention, & here I was wanting to do a little bird applique on a corduroy jumper I plan to wear for our family’s Thanksgiving dinner tomorrow.  I guess “necessity” is stretching it, because I could have just drawn what I wanted, but I really like to see things first & I generally do not trust my artistic skills.

This would have been a non-issue, except my printer isn’t working.  It isn’t broken or anything.  It’s just out of color ink, so of course this means it won’t print black & white either.  But maybe I’ve ranted about that before. (I’m open to suggestions for budget conscious all-in-one printers that won’t bleed me dry over ink.  I’m very partial to upgrading to a wireless printer, too.)

I decided on this too late to get to the library to print, but when I went the other day their printer was broken.  It has been broken for a month, but the lady filling in for the librarian assured me someone was coming to fix it.  I’m sure.

So I came up with the idea of using my laptop as a lightbox & just tracing off the design.  Genius!  I doubt I’m the first person to have ever thought of this, but no one told me about it.

First, here is the image I found:

It’s adorable, comes in three sizes, & totally worth the $2.50 if you use a digital embroidery machine (I don’t).

Okay, now that I feel less guilty & pirate-like, let’s move on with a totally unnecessary photo step-by-step of how to use your laptop as a lightbox for tracing images. 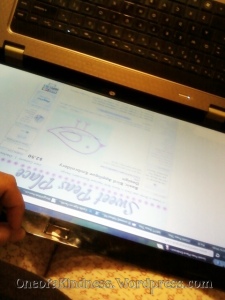 Step 1.  Turn your laptop upside down so the screen is laying on the surface with the keyboard waving in the air like it just don’t care facing you.  Tilt the screen back so it’s out of your way.

Step 1b.  Check out my awesome grampy pj pants.  There must have been a death at the nursing home, because the local thrift store had a whole rack of those when I went.  It was $5 fill-a-bag day, so I stuffed a pair of flannels in my bag.  I also got a velvet jacket, pink quilt, & a pair of groovy 70s polyester pants for a friend, but I digress.

Step 2.  Place a piece of plain white paper over the image on the screen.  Of course the image is going to be upside down, but I don’t think it will be important.  Just turn it right-side up before you use it.  Or turn what you’re drawing it on upside-down so they match.  Whatever floats your boat.

Step 3. Trace the image using a pencil.  I recommend a pencil because it writes smoothly without needing much pressure.  That can be an issue with some pens, & using makers/sharpies runs the risk of bleeding through & leaving a permanent image on your laptop screen.  If you want real specifics, I used a watercolor pencil because I’m awesome.  Sorry for the lack of an action shot, but I’m going to give you guys credit for knowing how to hold a pencil.  I believe in you!

Another reason this is going to come in very handy for me is for a quote I’m wanting to paint on the writing desk I’m redoing.  My font size doesn’t go as big as I’d like the quote to be, so just being able to print it out at the library won’t help that.  (My printer has a copy function that could enlarge it, but, well… you know.)  This way I can zoom the viewer in & trace the text at the size I want it.

It’s gonna be a PITA to trace a whole quote though.  I have wobbly hands, so having to trace it twice – once on the screen & again on the table – will yield some interesting results.  And then there’s when I paint it.  Fun, fun.

I’m a bit of a hypochondriac & found out last year Parkinson’s runs in my family.  Now every time I draw or trace something I have a mild panic attacking thinking I have Parkinson’s & feel the need to go to the ER.  I’m tragic.

So there it is, a step-by-step tutorial of how to trace an image off your laptop screen & a gander at my pajamas.  Now don’t we all just feel enlightened & a wee bit sexier?

Welcome to my Work In Progress. It's not that I'm lazy. I'm just easily distracted. Ooh, shiny!

OOAK Around The Web

If you would like to be added to the blog roll, email OOAK

Disclosure: All of my opinions are mine. Any products I use are my own, paid for by me. However...

I am an Amazon affiliate so you will see links to Amazon, but only text links inside the posts. Links are added after a post is written, & I only link to items used in the post. I never link items for promotional purposes.

Just trying to make a few extra pennies where I can. I do have a father to support!